As the Electric Vehicle (EV) industry continues to grow exponentially, so must the infrastructure that powers it. Here’s how 4G LTE Routers and the Industrial Internet of Things (IIoT) can help.

EV, IIoT, and Other Acronyms

As with most modern technology, there are lots of acronyms and technical jargon surrounding the world of electric vehicles and industrial networking. So, before we get started, I thought I would include a brief overview of the technologies we’re going to be talking about. Already know your BEVs from your PHEVs and your M2M from your IIOT and Industry 4.0? Then skip ahead to the next section: Paving the Way for Electric Vehicles.

It’s been nearly 20 years since the Toyota Prius first hit UK streets. While they might not have been an immediate hit, rising fuel costs and environmental concerns have seen the Electric Vehicle (EV) market boom over the past two decades. Now there are around 120 different models of EVs,[1] with most of the biggest car manufacturers now offering a plug-in vehicle.

As of December 2018, there are 212,000 plug-in electric vehicles in the UK, including both Plug-in Hybrid Electric Vehicles (PHEVs) and Battery Electric Vehicles (BEVs).[1] While they currently (pun intended) only account for 1.7% of new car and van sales the number of EVs in the UK is expected to reach as high as 36 million by 2040.[2] Moreover, with proposals to ban sales of non-electric cars after 2040, that number can only be expected to grow.

The Internet of Things and Industry 4.0

By now, we’re all used to hearing about the Internet of Things (IoT) and every ordinary device having “Smart” added to the beginning of its name. Just this month we’ve seen the unveiling of a Smart Sofa and a Smart Pet Food Bowl at CES. So, what does the proliferation of smart devices have to do with EV Charging?

The Industrial Internet of Things (IIoT) is a subset of the larger IoT for, you guessed it, industrial devices, allowing these devices to collect and share large amounts of information. They can include manufacturing robots, warehouse drones, and EV Chargers. “But isn’t this just what we once called M2M communication?” I hear you ask! Yes and no is the answer. While both facilitate device-to-device communication, the core difference between M2M and IIoT is where M2M often utilises a range of technologies to create Point-to-Point (PtP) connections between devices, IIoT is reliant on IP networks and often employ a cloud-based middle layer.

Then we get to Industry 4.0. Also known as the “Fourth Industrial Revolution” or “I4”, Industry 4.0 is the term given to the rise of “the Internet of Things […], autonomous robotics, cyber-physical systems, cloud computing, and artificial intelligence” in industry.[3] It is expected that the technologies that power Industry 4.0 will have a market value of $152 Billion by 2022.[4]

With widespread 5G coverage not expected in the UK until “2022 or later”,[5] 4G (or 4G LTE) mobile connectivity can theoretically reach up to 150Mbps, but download speeds are often around 80Mbps in real-world scenarios.

4G LTE Routers, such as the Teltonika RUT series, can connect to 4G Networks (they’re also backwards compatible with 3G and 2G networks). Internet connectivity can be shared with external devices, like computers, phones and IoT Devices, via Ethernet or Wi-Fi. This is ideal for enabling IoT applications in both rural and urban environments where wired connections are difficult or impractical to use. 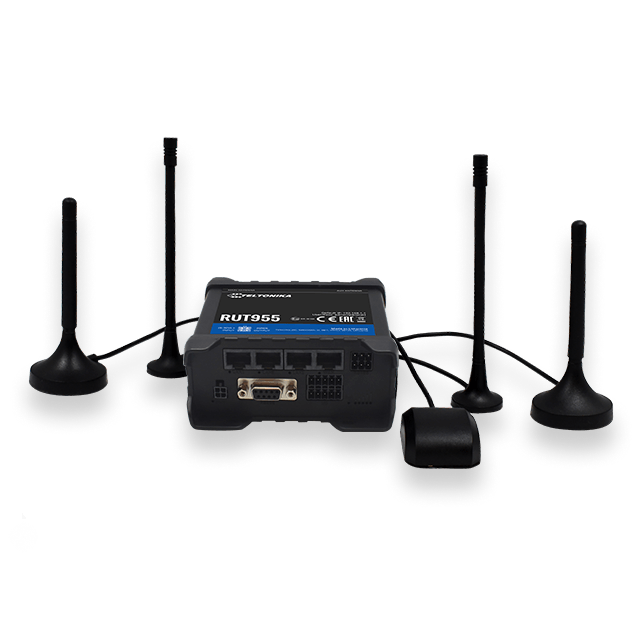 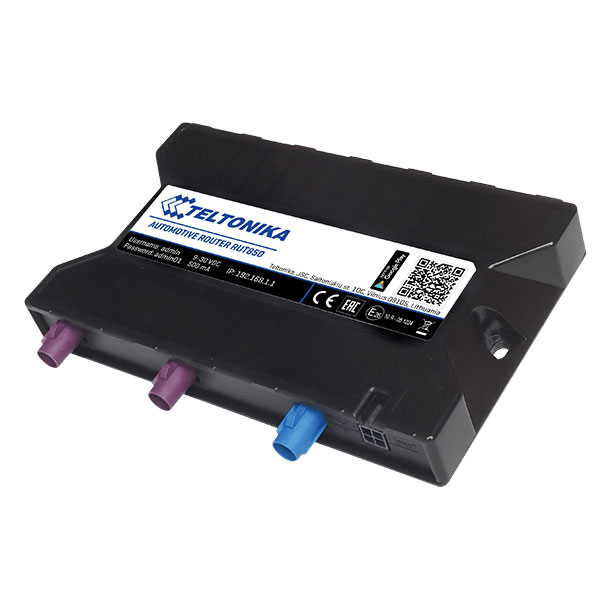 Compact Teltonika RUT850 LTE Router Teltonika's RUT850 is a compact and slim design LTE wireless router that is ideal for vehicle deployments. It supports the IEEE802.11n and…

Paving the Way for Electric Vehicles

So what needs to happen to reach the Government's goal switching to 100% electric by 2040?  The number one barrier to buying an electric vehicle according to a poll by Ipsos Mori[6] is the availability of charging stations. Another poll by the AA shows that “85% of people overall in the survey said that there aren’t enough public charging points for EVs”. It’s clear that EV charging points will be in greater and greater demand over the coming decades; an opportunity that innovators and start-ups up and down the country are taking advantage of.

With a conventional internal combustion engine (ICE) car, fuelling up nearly always takes place at dedicated petrol stations. However, the ubiquity of electricity means that EVs have much greater flexibility over where they charge. The average EV range is between 150 and 200 miles,[7] and the average distance drove being only 21 miles[8] meaning many EV users can charge either at home or at work. EV charging stations are also now familiar sights at public car parks and motorway service stations for EV users travelling a longer distance.

While this is suitable for the thousands of existing EV owners, there are still many people for whom this is still not sufficient. Over two-thirds of cars in London do not have access to off-street parking[9] making charging at home challenging, if not impossible! To make it even more difficult, charging at work is not an option for the two-thirds of workers in London that do not use their cars to get to there. The availability of public EV charge points also declines outside of urban areas, which can make it challenging for rural EV owners to charge when they’re not at home or work.

It is estimated that the share of home charging will decline from approximately 75% in 2020 to about 40% by 2030.[10] This means building much more public EV charging points to support the growing number of EVs that will not have access to private charging. The need for this infrastructure is widely recognised with Government grants of up to £7,500 per charge point available for installers of on-street residential EV chargers.[11]

EV charging station infrastructure costs can vary greatly depending on what is required. Private home-based chargers can be relatively inexpensive with government grants. Commercial charging stations, however, are much more expensive but they can provide the fast charging capabilities that 65% of Britons would like.[6]

How to Reduce the Costs of Urban Charge Points

A key element of expanding EV Charging Networks in urban environments will be minimising costs and making it viable to provide every street, or even every house, with their own on-street charge points. One way of achieving this is by taking advantage of existing infrastructure. Not only does this reduce the costs of digging up roads and laying cables, but it also minimises costly disruption (roadworks alone cost the economy £4 billion a year!).

Electricity is (nearly) everywhere, especially in urban environments. The past couple of years have seen some innovative approaches to leveraging this infrastructure. For example, there’s the German firm Ubitricity who are adding charging plugs to street lights.[12] Liberty Global has also just announced they are going to use Virgin Media'scabinets to provide EV charging capability.

Fixed line connections can offer speed and reliability, but they can be difficult and costly to install and maintain. Wireless connections using 4G or LTE routers, however, require no additional cables and provide the flexibility to be added to or integrated into EV charging points with relative ease and at a far lower cost.

LTE Routers, such as the Teltonika RUT950, offer a range of features specifically for Industrial IoT use cases. Designed for mission-critical communications, the RUT950 is equipped with dual-sim slots to provide the reliability EV charging station providers need. External antenna connectors mean the Teltonika RUT 955 can also be integrated nearly anywhere in the charging station while the antennas can be placed where 4g coverage is best.

Wired connectivity can be challenging in urban areas and it can be almost impossible in some rural areas! With 4G service now covering over 80% of the UK,[13] LTE routers are the ideal choice for getting EV chargers connected. But did you know they can also add value to commercial charge points?

The built-in Wi-Fi and RADIUS support, The Teltonika RUT950 allows commercial customers to provide connectivity to customers using their own portals or even connect other IIoT devices. As an example, smart lighting could keep parking spaces lit and safe while in use and cut operation and energy costs by 25-50%. IP video cameras could also use the Wi-Fi to keep parking areas secure without the need for traditional wired connections.

Another potential value-add for installers of EV charging stations is remote monitoring and management. By having an awareness of which charge points are in use, how quickly they’re charging and how long cars remain in the spot after fully charging, for example, charging providers can ensure customers are persuaded to use stations that are not only more convenient but maximise network utilisation.

Installers of EV charge points can even provide ongoing support. Managing Teltonika 4G LTE Routers remotely is easier than ever with their Remote Management System (RMS). Provide technical support, securely update firmware and configurations and view network statistics from anywhere in the world. Diagnosing issues and preventative maintenance no longer means sending engineers to the site!

Electric Vehicles are experiencing a massive surge in popularity and ownership, which is only expected to keep on growing. For many people, however, range anxiety is still a significant barrier to buying their first EV. Charging infrastructure, while steadily improving, needs to keep up with this demand. This requires a substantial increase in on-street residential and commercial charging points across the country.

Leveraging existing electrical infrastructure and combining it with innovative technologies, such as 4G LTE Routers from Teltonika, can help make this a reality. The addition of LTE connectivity to EV charging stations can have significant benefits for consumers and installers. Not digging up roads to lay new cables can significantly reduce installations costs and the built-in Wi-Fi hotspots in Teltonika 4G routers can help connect customers and allow charge points to take advantage of the Industrial IoT. Additional features like Teltonika’s Remote management system can even enable installers to add-value to their services from one easy to use interface.

If you would like to know more about Electric Vehicle charging and how the addition of 4G LTE connectivity can help reduce costs and add value to your service, please get in touch, we’re happy to help!