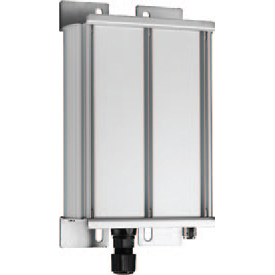 Repeatit Trinity is a series of point-to-point (PtP) wireless radios by Repeatit. The Repeatit Trinity-300TDD Plus operates in the 5GHz band for wireless links >10km with data rates up to 190Mbps aggregated throughput. The Trinity series radios are all completely transparent ethernet wireless bridges with two radios provided as a point-to-point link pair.

The Repeatit Trinity-300TDD is the connectorised version of the Trinity 300 series and has two N-Type Jack connectors for either two independent antennas or a single MIMO Dual Polarity Antenna.

The Trinity-300 uses TDD technology to emulate full duplex links and operates symmetric or asymmetric while also optimising the link for low latency. The TDD-based proprietary protocol reduces the impact of long distances and strengthens the link against interference.

The Repeatit Trinity adapts to the local environment by automatically changing modulation for best performance. ACM can also be turned allowing for manual configuration.

With unlicensed bands interference can be difficult to avoid which means the requirement for retransmissions can be regular. The Trinity-300TDD software performs retransmissions at the link layer and reacts to lost radio frames before the higher transmission layers. The proprietary retransmission algorithm in all Trinity-300TDD wireless devices ensures low latency, high reliability and that frames are delivered in order.

All Repeatit Trinity links are sold as link pairs and are pre-configured for out of the box use on delivery.