A number of different frequency ranges are available to utilise by those looking to offer Fixed Wireless connectivity within the UK. The sections below provide information on those frequencies most commonly utilised by MS Distribution's customers.

You can jump to the frequency range you're interested in by clicking on the relevant link below:

Formerly used for TV White Space devices, this unlicensed spectrum has been recently opened for use by Fixed Wireless devices.

The 2.4GHz band is the most common band for most wireless devices ranging from Home Routers and HotSpot locations e.g. Caravan Park, Shopping Centres and Cafés to Portable mobile devices such as Mobile Phones, Tablets and Games Consoles.

The spectrum operating frequency range is 2412 – 2484MHz. The OFCOM /ETSI standard for UK Operating channels are between Channel 1 - 13.

The spectrum operating frequency range is 5150 – 5850MHz. The OFCOM / ETSI standard for UK Operating channels split into 3 bands: Band A, Band B and Band C.

The maximum EIRP (Effective Isotropic Radiated Power) depends on which band is in use (see below). 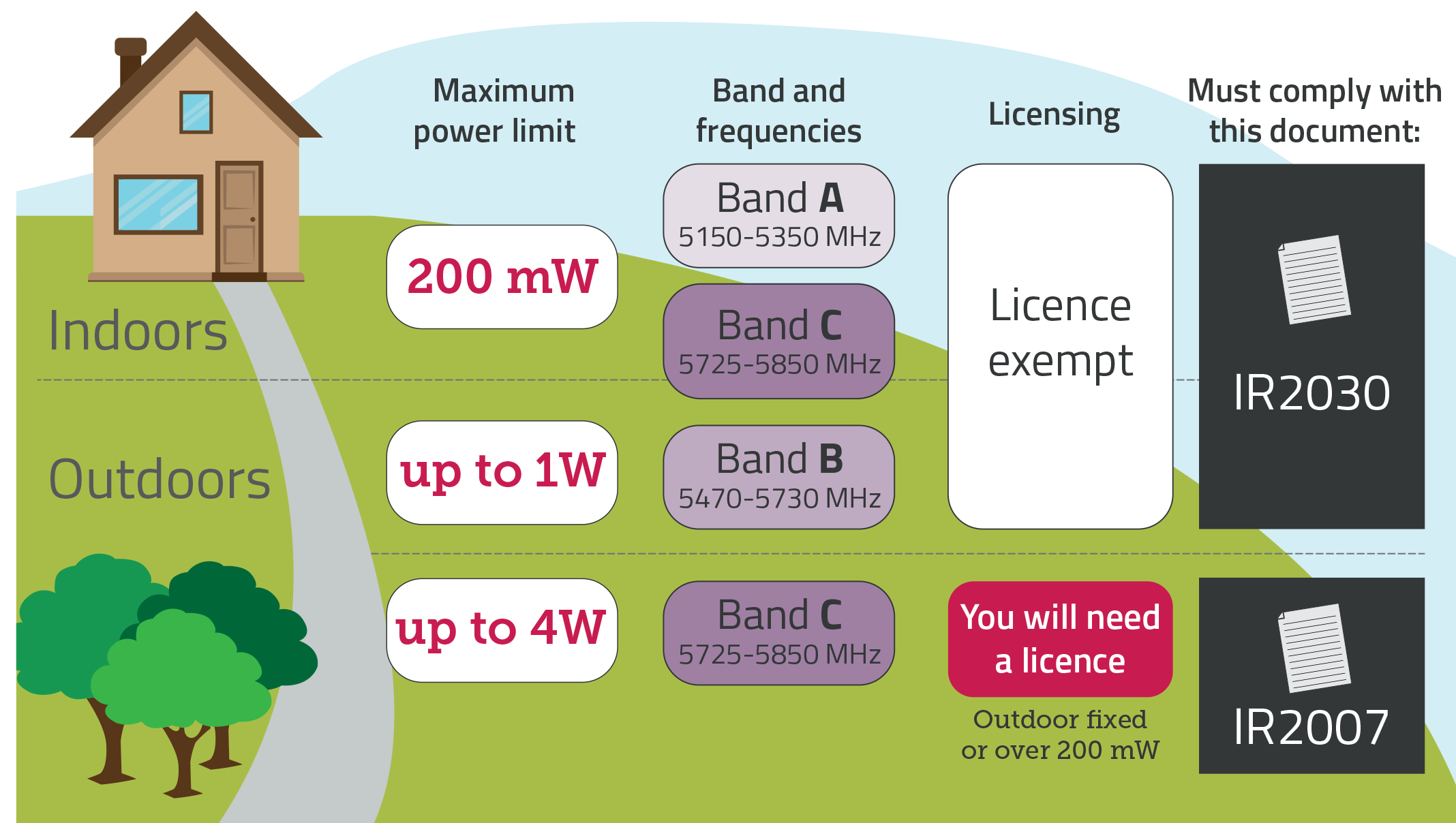 Band A is used for indoor 5GHz use i.e Home Networks, Public HotSpots and Cafes.

Indoor and Outdoor Use

Band B is used for indoor and outdoor 5GHz use i.e Dual Band Routers, HotSpots and Cafes.

Band C is used for long range PtP (Point to Point) or in some cases (PtMP) (Point to Multi-Point) wireless links. For example, backhaul connectivity between two locations.

Band C requires a “Lite Licence” known as the Fixed Wireless Access Licence. There is a fee of £1 per terminal, with a minimum fee of £50. The licence is obtained directly from Ofcom.

For more information, or to apply for your licence, visit Ofcom’s website.

The 24GHz spectrum is a licence free band. However, its use is limited as per the guidelines from OFCOM / ETSI. 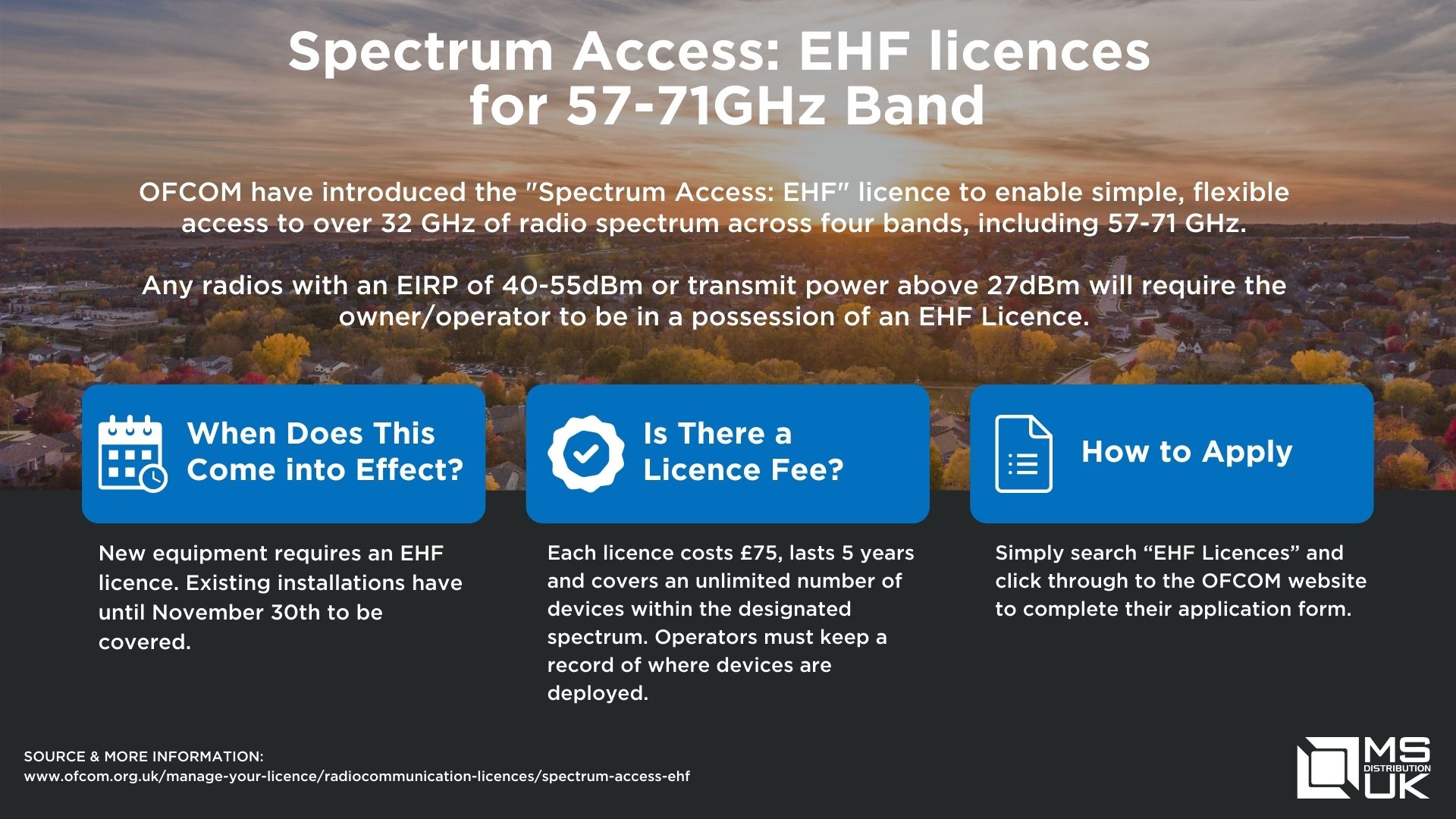 The 60Ghz V Band spectrum (57-71GHz) is mostly licence free. Following an Ofcom amendment in 2021, any radios with an EIRP of 40-55dBm / transmit power above 27dBm will require the owner/operator to be in a possession of an EHF Licence.

The EHF Licence is a single licence that allows deployment of an unlimited number of devices within the designated spectrum (in this instance, 57-71GHz). It costs £75 and lasts for 5 years. The licence holder is responsible for keeping a record of all deployment locations (which Ofcom may request at any time) and ensuring that EMF requirements are met by conducting assessments on deployed devices.

Operators are required to be in a possession of an EHF Licence before installing new 60GHz devices. Those who already have deployed devices have until 30th November 2021 to acquire their licence.

You can find out more information, and apply for your EHF licence, on Ofcom’s dedicated webpage.

The 70-80GHz spectrum requires a "Lite license" which is obtained through Ofcom. The spectrum operating frequency range is 71.125 – 75.875GHz. The CEPT recommendation reference is ECC/REC (05)07.